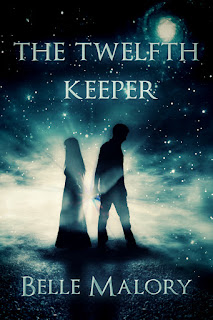 The Twelfth Keeper has been released! And a few days early, because I just did NOT want to wait any longer. I hope you all enjoy the book! And as a sorta celabratory surprise--I'm posting a teaser below...

Teaser from The Twelfth Keeper:

Kennedy dazedly made her way through the narrow hallway. She was so distracted and wrapped up in her own head she didn’t notice that someone was coming from the opposite direction.
Phoenix was a few feet ahead. Black eyes met hers as they closed in on each other. Her pace slowed involuntarily, invisible shackles tied to her feet. It was like this every time he was near; her whole body shut down in his presence. What was it about him that was so…alluring?

She stopped, waiting for Phoenix to make his way around her. Except he didn’t. He stopped directly in front of her.

Kennedy politely stepped aside, giving him plenty of room to go around. Head lowered, she waited with her back against the wall. He would disappear soon and she would be able to breathe again.
His feet moved. But his legs only turned, repositioning. She looked up to see he was right there facing her.

Only a breath away.

Kennedy couldn’t bring herself to look away. The sharp lines of his face, softened by full, perfectly sculpted lips, so uniquely handsome. The way his straight nose suggested superiority, yet was offset by hints of dimples at the corners of his mouth. If he were to smile, it would be devastating.
Wait. Why was he just standing there—staring?

His eyes roamed over her as if he had every right to look. Granted, she was doing the same thing, but only because he wasn’t moving. And the way he was looking at her—Kennedy felt like she was being devoured.

Why wasn’t he leaving?

She wanted to ask him, but the words were lodged in her throat. She supposed she could walk away, squeeze through the small space between them and hightail it down the hall.

But she didn’t move. Couldn’t move was more like it.

A wavy tendril of hair had fallen across her forehead. Phoenix reached for the strand, pulling his hand back at first, like he was afraid to touch her. A moment passed, and he reached for it again, tucking it behind her ear.

His warm fingertips lingered there, on the side of her face, slowly brushing over her cheek. Roaming down the curve of her neck.

Her heart hammered against her chest. Pounding to get out. Breathing was difficult. Very difficult.
Being this close to Phoenix terrified her. His touch sent tingles down her spine, paralyzing her with fear. Yet, at the same time...it thrilled her.

She closed her eyes, leaning her head back against the wall. Trying to will the air back into her lungs.
She should walk away.

Nothing about this situation was making any sense. Normal people didn’t fawn over complete strangers in empty hallways. Phoenix Jorgensen wasn’t exactly a normal person, but still.
Even with her eyes closed Kennedy felt him coming closer. His warm breath next to her ear, sending a wave of shivers through her body. He hovered, right beside her face, their lips were almost touching.

If he would come just a tiny bit closer, maybe it could be as intoxicating as her dream.
Kennedy swayed forward, then abruptly opened her eyes.

Nothing but air.
Posted by Belle Malory at 11:50 PM